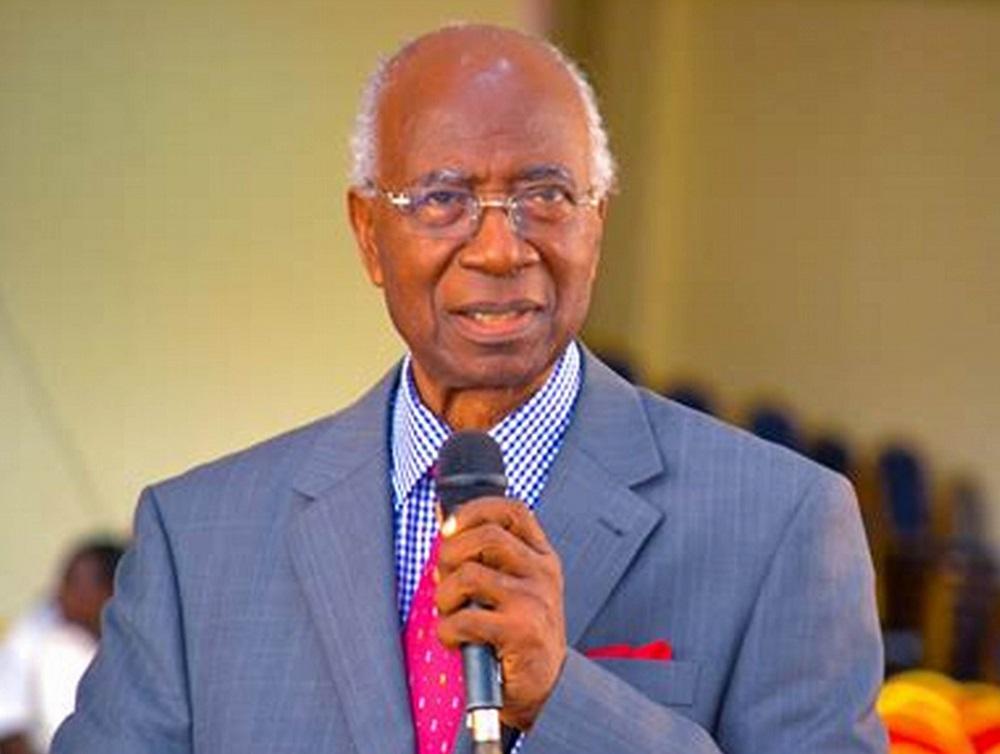 On June 15th 2020, the College of Medicine University of Ibadan, The University of Ibadan, the Nigerian Medical and Scientific Community and the Nation lost an icon. Emeritus Professor Oladipo Olujimi Akinkugbe was a giant who blazed a trail so that many of us could follow in those footsteps. To those who were fortunate enough to be taught by him, he was a teacher par excellence, kind and generous with his knowledge, and inspiring through his dedication to excellence. He served as a mentor to many and accomplished a body of work and service to the country in his lifetime that has ensured his place in history. His commitment to excellence in Medicine was equaled only by his commitment to Nigeria, and he served as an advisor and technical consultant to heads of State in their efforts to improve delivery of health care across the country. In his later years he established a hypertension treatment center and served as the pioneer President of the Ibadan college of medicine Alumni Association Worldwide. On behalf of the executive committee and the members of ICOMAA North America, we extend our condolences to his family, friends and colleagues, and to the Ibadan College of Medicine, The University of Ibadan and all ICOMAA Members worldwide.

With a deep sense of loss, but gratitude to God for a life well spent in service of humanity, the Ibadan College of Medicine Alumni Association (ICOMAA) Worldwide commiserates with the families, friends, associates and ICOMAA members worldwide on the transition to glory of her Foundation President, Emeritus Professor Oladipo Olujimi Akinkugbe, CFR, CON, NNOM, FAS. He was a great pillar of support for the Association which he continued to nurture up to the last minute of his life. We pray God will grant him eternal rest and comfort us all.

The Distinguished Clinician and Cardiovascular Scholar of a Bygone Era.

It is with a heavy heart that I announce the passing of Professor Oladipo Olujimi Akinkugbe on June 15th, 2020. He was Professor Emeritus of Medicine at Nigeria’s premier Medical School, The College of Medicine, University of Ibadan.

As one of his medical students at UCH in 1985, my best memories of him were his evening clinical clerkships at the patients’ bedsides. This was commonly conducted in the evenings, shortly after dark, and was usually a focused teaching on a selected patient. As a dozen of us young future doctors surrounded him, he stood tall in his heavily-starched, glowing, and spotless white lab coat. He would gently bend down as he methodically examined the patient from the toes all the way to the scalp. He exemplified the best of bedside Medicine and humanistic discipline. Further, he usually started his core medical teachings with historic anecdotes and the Latin or Greek origin of the particular disease in question, making it much more understandable and memorable. He made medicine fun.  He engaged us with a lifelong passion to help the sick.

As his intern in the Hypertension Unit, UCH in 1989, I had the opportunity, along with all of us in the Unit, to attend with him the Lagos portion of the International Society of Hypertension Conference.  This meeting jointly took place in Lagos, Nigeria and Nairobi, Kenya… In 1990, he and Alex Haley (author of ROOTS) were the keynote speakers at this same conference in Los Angeles, CA. I met up with him at this wonderful conference, where he later introduced me to Julian Haywood, M.D. (Professor of Cardiology at USC) and Clarence Grim, M.D. (Professor at UCLA). This meeting served as the beginning of my career in Cardiovascular Medicine.

Professor Akinkugbe was born in Ondo town in Western Nigeria on July 17th, 1933, although his family tree extends back to Igbeti in Oyo State. He grew up in a Christian home; his father was a people’s warder at St. Stephen’s church, a chemist by profession, and his mother was a grade school teacher. In 1944, he entered Ondo Boys High School but because of his interest in sciences, he transferred to Government College, Ibadan, after passing the entrance examination.

He gained admission into the University College Ibadan in 1951, to study Medicine. From there on, he became a trailblazer on his long and remarkable medical journey into the top institutions in the world.  After passing his 2nd MB examination in 1955, he moved to London [the Royal London Hospital] for his clinical rotations, and in 1958, he obtained his M.D. degree from the University of London. He completed his internship at the Hospital, and obtained an additional diploma in Tropical Medicine and Hygiene from the University of Liverpool in 1960.

Professor Akinkugbe came back to Nigeria in 1961 and worked at Government Specialist Hospital, Adeoyo, Ibadan. He later went back to England for more training and obtained his PhD from Oxford University in 1964.

In January, 1965, he returned to Nigeria to take up a lectureship at the Department of Medicine, University of Ibadan. This began his brilliant academic career, during which he became Professor of Medicine in 1968, Dean of Medicine in 1970 – 74 and Head of Medicine in 1972. His research interest was Hypertension and Kidney diseases, where he distinguished himself, conducting and publishing landmark scientific investigations in reputable journals, writing academic books, book chapters in Medical Textbooks, and made tremendous scientific contributions to Human Medicine.  He organized, lectured and chaired over one hundred national and international professional, scientific, educational, and health conferences, in the past forty years, in all the continents of the world.

In 1966, during this distinguished career, he was Rockefeller visiting fellow at the prestigious John Hopkins Hospital in Baltimore, MD; Yale Medical Institution in New Haven, CT; and University of Washington, Seattle Medical School. In 1973, he was a member of University Grants Commission in Uganda Government. From 1974-75, he was a visiting Professor of Medicine, Harvard Medical School, and Senior Physician Associate in Medicine at Peter Bent Brigham Hospital (now Brigham and Women’s Hospital) in Boston MA, USA. In 1981-82, he was a visiting Professor of Cardiovascular Medicine, and Fellow of Balliol College, Oxford University. In 1983-84, he was Secretary to the WHO Technical Discussions on Universities and Health for All in Geneva, and in 1990-94 he was a visiting Professor of Medicine to WHO and a member of WHO Advisory Committee on Health for Research.

Prof. Oladipo Olujumi Akinkugbe, CON, MD, NNOM, our beloved and respected teacher, our distinguished scholar, and a fine human being has passed on to the beyond. Sleep in the Lord, our dear professor. In our hearts, you remain the teacher of teachers, professor of professors, and the clinician of clinicians.

Since independence, Nigerians have made tremendous progress in various fields of study, in many cases becoming world renowned authorities in their areas of specialization.  Such is the case of Professor Oladipo Olujimi Akinkugbe, CON, MD, NNOM, who on promotion to a chair of medicine at the University of Ibadan at the age of 35years becomes the first Professor of medicine that has ever been appointed by any African University.  On the international plane, professor Akinkugbe has made an enviable impact.  He was Rockefeller visiting fellow John Hopkins, Yale and Washington, Seattle Medical School [1966], member university Grants commission, Uganda government [1973], visiting professor of medicine, Harvard University and Senior Associate in Medicine, Peter Bent Brigham Hospital, Boston Massachusetts, USA [1974-75], visiting Professor of Cardiovascular Medicine, and fellow of Balliol college, university  of oxford [1981 – 1982], Secretary to the WHO Technical Discussions on Universities and Health for All, Geneva [1983 – 84], member WHO Advisory Committee on Health for Research [1990 – 1994] and visiting Professor of Medicine.

Professor Akinkugbe was born in Ondo capital of Ondo State in South Western Nigeria on 17th July, 1933.  His father who was a chemist and druggist belong to an impressive family tree in Ondo traceable and connected in some distant past to the marble rich clan of Igbeti in Oyo State.

Professor Akinkugbe grew up in a Christian home, his father being a people’s warder at St. Stephen’s church and a synod delegate for several years.  The regular routine of school, choir practice, Sunday’s Devotional Worship, Sunday school, evening service and other such engagements, left him with little time for frivolities after school.  However whenever the opportunity presented itself, young Oladipo never failed to enjoy his juvenile frisk and frolic, sometimes with disastrous consequences.

Professor Akinkugbe entered Ondo Boys High School in 1944.  However science subjects were not counted among the strong point of OBHS, and inspired by the notes he saw in physics, chemistry, biology and mathematics, belonging to a boy who was attending another school outside of Ondo, young Oladipo decide to take entrance examination into Government College, Ibadan.  He made it to the interview stage, where he missed admission by one place.  His dreams seemed shattered, but providence came promptly to his aid as one of the admitted fee-paying students could not take up his own offer.  He was then called up from the waiting list.

Professor Akinkugbe had a smooth sail through GCI, where he established himself as an undisputed leader in the science subjects, conceding English and literature to Wole Soyinka and Christopher Kolade.  After a brilliant secondary school career, he took entrance examination and gained admission into the University College Ibadan in 1951, to begin his study of medicine.

Here he proved himself, once again as a serious student, balancing academics with social and extra curricular activities.  After passing his 2nd MB examination in 1955, he was posted to University of  London [the Royal London Hospital] for his clinical studies, where in 1958, he obtained his MBBS of London without any skirmishes.  After completing a six months internship at the London Hospital, Professor Akinkugbe then embarked on numerous short programmes in different institutions, expanding his knowledge and experience, and obtaining a diploma in Tropical Medicine and Hygiene from the University of Liverpool in 1960.

Being a western region government scholar, Professor Akinkugbe came back to Nigeria in 1961 and took appointment with Government Specialist Hospital, Adeoyo, Ibadan.  But later that year he went back to England to do his Dphil. programme in Oxford.  On successful completion, he returned to Nigeria to take up lectureship at the Department of Medicine University of Ibadan in January 1965.

Thus began Professor Akinkugbe’s brilliant academic career during which he became Professor of Medicine in 1968, Dean Medicine 1970 – 74 and Head of Medicine 1972.  Taking special interest in Hypertension and Kidney diseases, he has made tremendous contributions in these areas.  He has attended over one hundred National and international Professional, scientific, educational and health conferences, in the past forty years, in all the continents of the globe.  He has made presentations in many of these conferences.  Published many authoritative works, and received numerous awards. He is a member and fellow of over twenty international organizations, societies and institutions.

He is a recipient of the National Honour of Cote De Voire.  Within Nigeria, Professor Akinkugbe was Foundation Chairman Joint Admission and Matriculation Board [JAMB]; Principal and Foundation Vice Chancellor, University of Ilorin; Vice Chancellor, Ahmadu Bello University Zaria; Chairman Planning Committee, Ondo State University; Chairman Planning Committee, University of Abuja; Pro-Chancellor and Chairman of Council, University of Port Harcourt.   To each appointment he has brought a very high degree of knowledge, skill, thoroughness, dedication and above all integrity and transparency.  He is married with two sons. 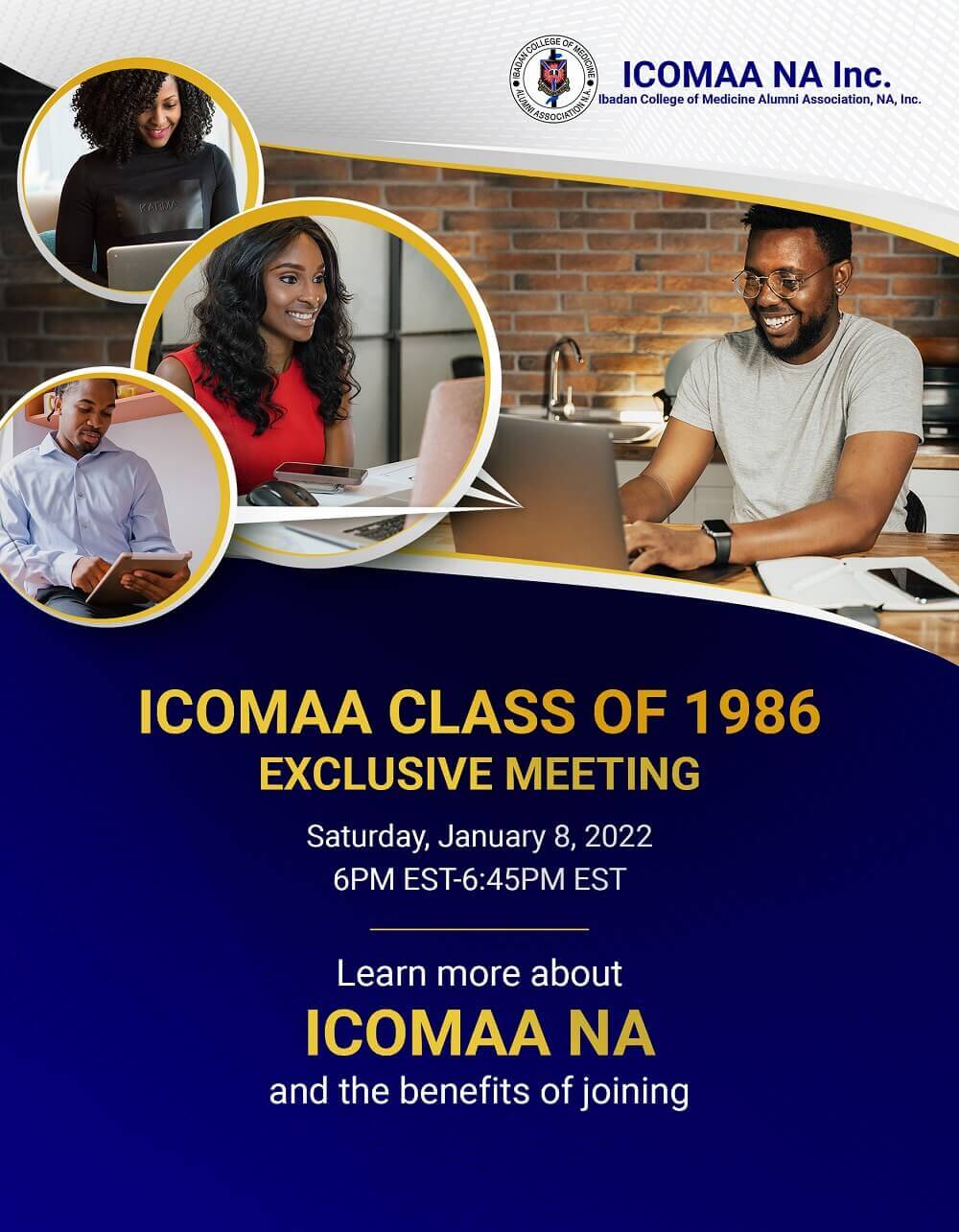 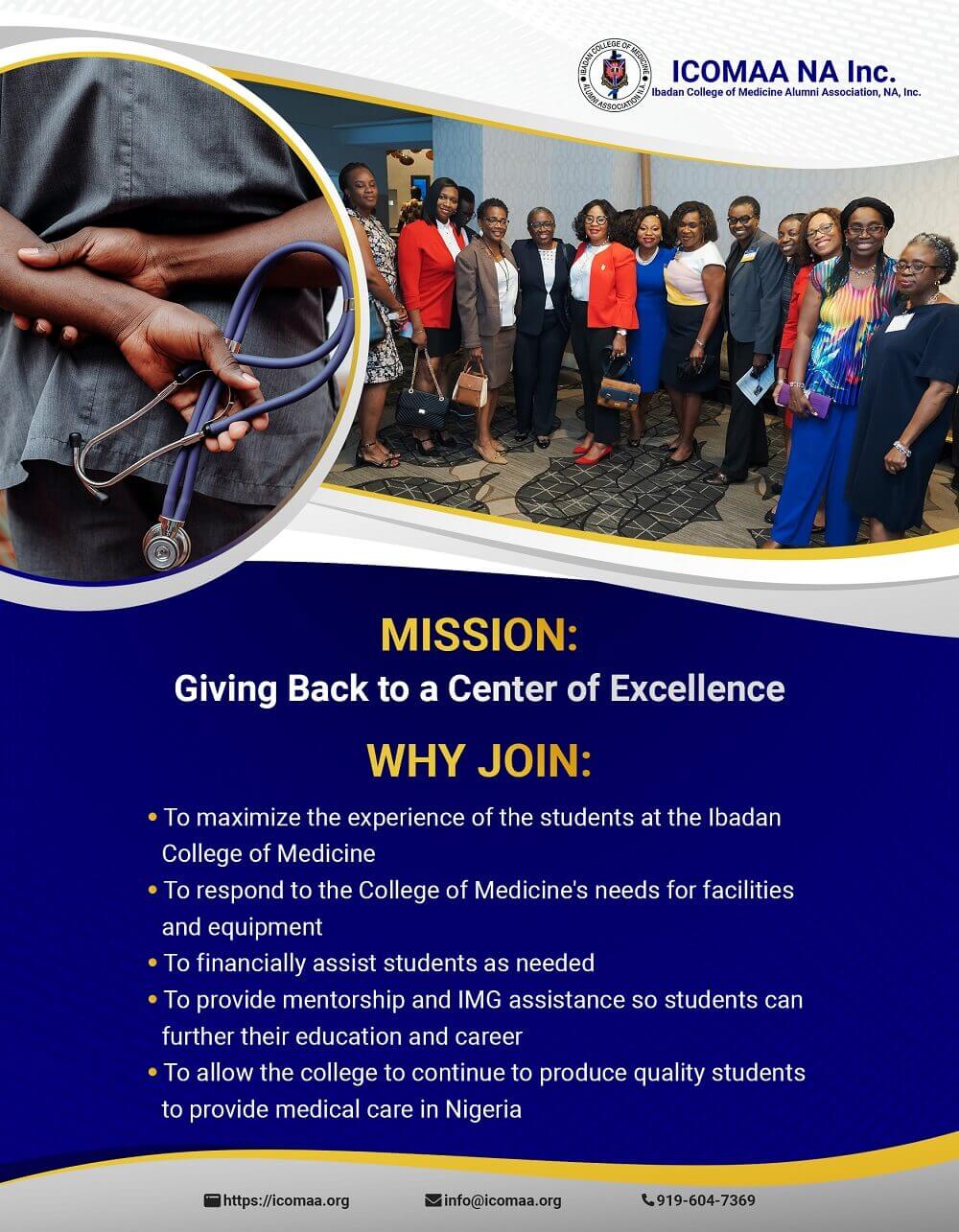 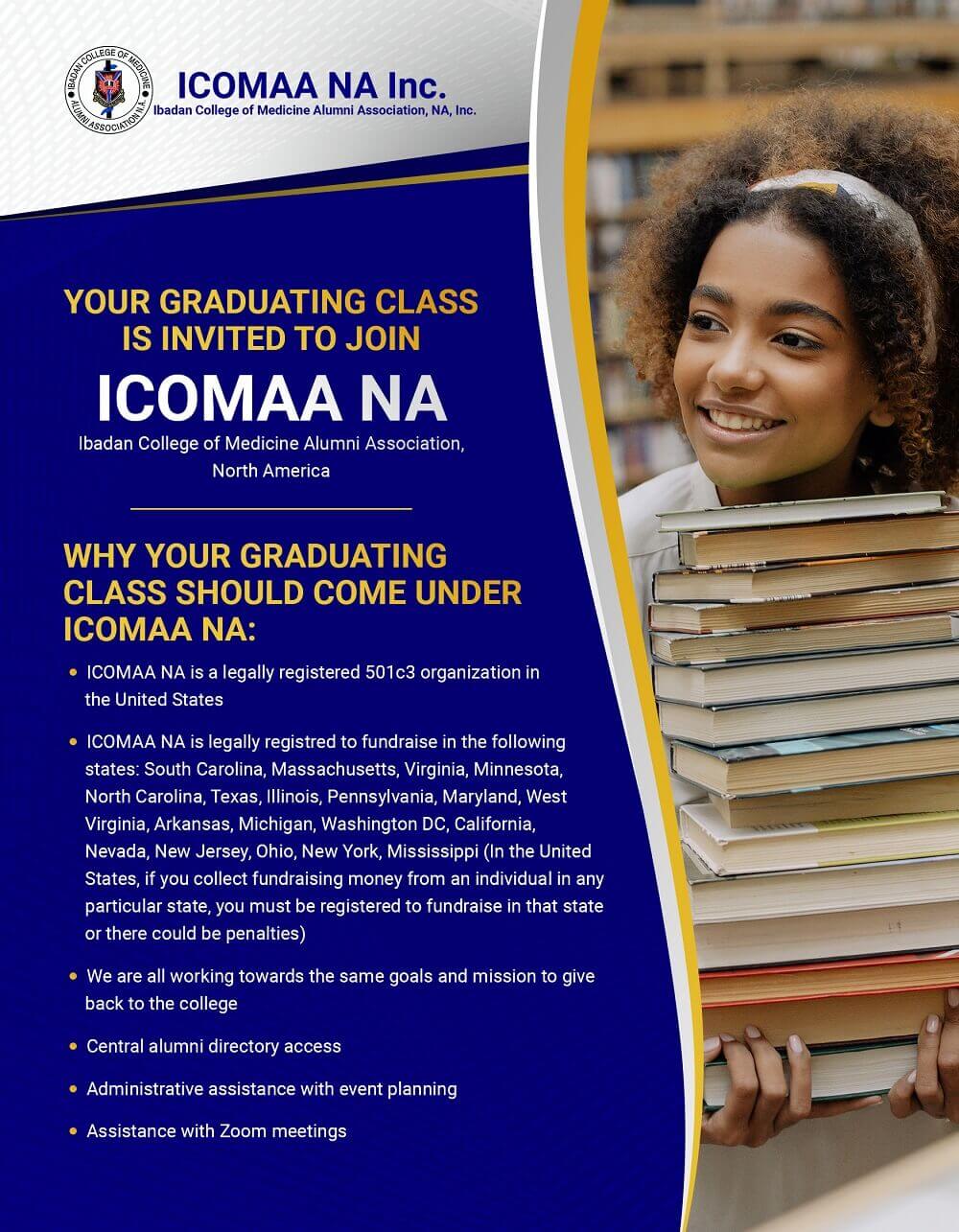 The North American Branch of the Ibadan College of Medicine Alumni Association was incorporated in the USA in 2001 as a non-profit tax-exempt organization with 501(c)(3) Status.